This is an excerpt of blog published on the Fans of IBM zSystems Hub to promote a Franklin event that IBM is sponsoring for the Military Community on June 29, 2022, at 12:30 EST. Register for the event here.

“As a 17-year combat veteran of the United States Airforce, I speak from firsthand experience when I say that the transition from the military to civilian life is one of the toughest challenges that men and women who serve our country will ever face.

The career paths in the military don’t always neatly translate to civilian life and the idea of starting over and learning a new field or pursuing a college degree can be daunting. For military dependents and spouses, it’s equally challenging. Unfortunately, many employers don’t want to hire someone who is going to be relocated every few years or who has the pressure of family commitments due to military deployments.

Over the past 18-months of being involved in the IBM Z® US Apprenticeship Accelerator program as part of the delivery team at Franklin Apprenticeships, I’ve had the opportunity to coach and support dozens of members of the military community – from veterans, transitioning service members and reservists to military spouses and dependents. In fact, one in five of the students that have been hired into IBM Z Apprenticeships are veterans. They have used the IBM Z Apprenticeship program to translate their military-learned skills and excel in a civilian career, while earning certifications.”

Read more on the Fans of IBM zSystems Hub.

Register for the event here.

Sharing Insight from the U.S. and U.K.

Apprenticeships provide an excellent opportunity for individuals of all ages to explore new careers through an alternative path. Individuals who seek a new career path may lack the time and resources to pursue a college degree as a full-time or even part-time student due to familial and financial responsibilities. Apprenticeship programs that offer an “earn while you learn” approach helps apprentices avoid taking on debt but still gain the necessary skills to pursue their dream career.

Franklin Apprenticeships and the City & Guilds Group recently hosted a roundtable with both apprentices and employers from the U. S. and U.K. who are committed to breaking generational barriers.

Sharing Insight from the U.S. and U.K.

Apprenticeships are an excellent opportunity to build gender diversity in a company’s early career pipeline. By providing a route to professional careers that does not rely on a degree, earn-and-learn apprenticeship programs are more accessible to people from all walks of life – and can be a powerful way for a company to improve gender diversity.

Franklin Apprenticeships and the City & Guilds Group recently hosted a round table with top apprenticeship employers in the U.S. and U.K. exploring how they have built gender diversity through their apprenticeship programs.

The participants included representatives from Siemens, T-Mobile, NatWest and The Urban Institute. They offered excellent insight into how to not only recruit apprentices to improve gender diversity within a team, but how to make sure they grow and develop their careers within your company.

Check out our highlight reel from the event and our infographic of five ideas we learned to attract and retain gender diverse apprentices. For a full event run-down, read more on City & Guilds’ website. 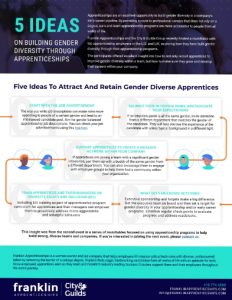